Kids + Canoes = getting nothing done.

Tandem White Water Canoe Outfitting as we see it Part 1

Counting on another great training season 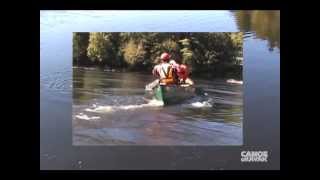 Wish I could make this happen some day.

Kids + Canoes = getting nothing done.

You cant be too serious about boating, I mean boating gets pretty serious! There are some fanatical personalities out there and canoeing draws out some eccentrics. Just ask some senior Alberta Canoe Instructors and coaches about MITH.

It had been a couple decades since working at summer camp, where I first started "teaching canoeing".

So when I first committed to running a youth or kids summer canoe camp I thought, no problem, Ill have these kids teaching their parents by the end of the week.

It was something I had thought about for a few years. It was mostly out of a desire to give the kids of my community the skills to get out on river trips with their parents. Even before my clients were asking me "so if we capsize what do we do with the kids?" I felt it was important. It is hard to give people answers to such a subjective situation. I would have to answer them with some of my own questions, "can they swim? do they know how to get out from under a boat that's up side down?, can they stay calm enough to follow direction?" Invariably the answer was to practice this with their kids before embarking on their trip.

Day one, camp one: After meeting the parents and reviewing the plans for the week the first challenge was rallying the group. Immediately I forgot what I was doing and who I was doing it with. The kids being in their wet suits and standing around while I sorted out waivers and details with the adults were melting and bored. Our canoe camp promptly turned into swim camp. Then water fight camp, then snack camp. My high hopes of mini canoe guides abashed. After first round of snacks done I forced my hand and we started talking about canoes, PFD's, paddles and safety. Halfway through day one and the canoes were still dry with requests for more snack time.

Fast-forward to year two, last day of camp four. Returning campers are making plans for an overnight trip and we are talking about river running progressions for the next year. A far cry from the first day the previous year. Ultimately how things played out was to reduce progression time lines and focus on attainable goals without actually making them a part of the camp. Trying to instill some solid fundamentals while not getting attached to any outcomes other than having fun. Honestly the campers were constantly asking to go swimming and if not swimming, more games. Skill drills were systematically drilled out of my itinerary.

In the end, while gradually introducing new skills and discouraging bad habits a week of afternoons had that amazing effect that consistency does. The kids were easily managing their canoes, making lake crossings, performing maneuvers and getting into and out of current. Their confidence exploded after practicing self and companion rescues. And finally their parents were satisfied when reporting back that the canoe camp was a highlight of the summer. By removing my goals and allowing the group to set their own nothing was accomplished while knowing it.